There are many systems engineering standards that have evolved over time, as indicated in Relevant Standards. In particular, there are standards that can have an influence on organizations and their projects as indicated in Figure 1 (below). Some pitfalls and good practices in utilizing standards are also identified in the article on relevant standards. In this article, several additional factors related to the utilization of the standards in systems engineering (SE) are presented.

Standards and their Utilization

A standard is an agreed upon, repeatable way of doing something. It is a published document that contains a technical specification or other precise criteria designed to be used consistently as a rule, guideline, or definition. Standards help to make life simpler and to increase the reliability and the effectiveness of many goods and services we use. Standards are created by bringing together the experience and expertise of all interested parties, such as the producers, sellers, buyers, users, and regulators of a particular material, product, process, or service. 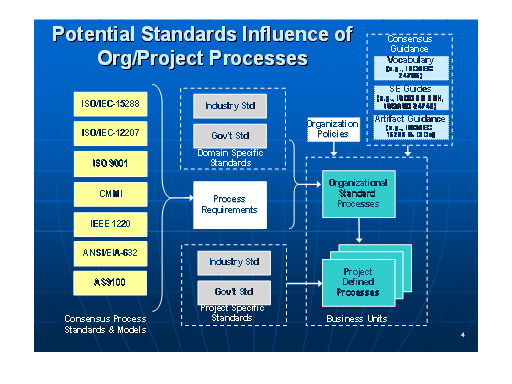 Figure 1. Potential Standards Influence of Organization and Project Processes (Adapted from Roedler 2011). Reprinted with permission of Garry Roedler. All other rights are reserved by the copyright owner.

Standards are designed for voluntary use and do not impose any regulations. However, laws and regulations may address certain standards and may make compliance with them compulsory.

Further, organizations and their enterprises may choose to use standards as a means of providing uniformity in their operations and/or the products and services that they produce. The standard becomes a part of the corporate culture. In this regard, it is interesting to note that the ISO/IEC/15288 15288 (2015) standard has provided such guidance and has provided a strong framework for systems engineers as well as systems engineering and business management, as forecast earlier by Arnold and Lawson (2004).

A standard does not in itself impose any obligation upon anyone to follow it. However, such an obligation may be imposed, for example, by legislation or by a contract. In order to be able to claim compliance with a standard, the user (of the standard) needs to be able to identify the requirements he is obliged to satisfy. The user needs also to be able to distinguish these requirements from other provisions where a certain freedom of choice is possible. Clear rules for the use of verbal forms (including modal auxiliaries) are therefore essential.

The directive also indicates that standards should avoid the use of will, must, and other imperatives.

In the context of the management system standards (ISO 9001:2000 and ISO 9001:2008 or ISO 14001:2004), certification refers to the issuing of written assurance (the certificate) by an independent external body that it has audited a management system and verified that it conforms to the requirements specified in the standard.

Typically, other more specific systems engineering standards are not the subject of certification. They are self-imposed in order to improve uniformity of organization and enterprise operations or to improve the quality of products and services. Alternatively, they may be dictated by legislation, policy, or as part of a formal agreement between an acquireracquirer and a suppliersupplier.

Conformance testing, or type testing, is testing to determine whether a product or system meets some specified standard that has been developed for efficiency or interoperability. To aid in this, many test procedures and test setups have been developed either by the standard's maintainers or by external organizations, such as the Underwriters Laboratory (UL), specifically for testing conformity to standards.

Conformance testing is often performed by external organizations, which is sometimes the standards body itself, to give greater guarantees of compliance. Products tested in such a manner are then advertised as being certified by that external organization as complying with the standard. Service providers, equipment manufacturers, and equipment suppliers rely on this data to ensure quality of service (QoS) through this conformance process.

Since the SE standards provide guidelines, they are most often tailored to fit the needs of organizations and their enterprises in their operations and/or for the products and services that they provide, as well as to provide agreement in a contract. Tailoring is a process described in an annex to the ISO/IEC/IEEE 15288 (2015) standard.

The ISO/IEC/IEEE 15288 (2015) addresses the issues of conformance, compliance, and tailoring as follows: