From SEBoK
Process Integration
Jump to navigation Jump to search

When performing systems engineering activities, it is important to consider the mutual relationship between processes and the desired system. The type of system (see Types of Systems) being produced will affect the needed processes, as indicated in system life cycle process drivers and choices. This may cause the tailoringtailoring of defined processes as described in application of systems engineering standards.

Figure 1 of life cycle models introduced the perspective of viewing stage work products provided by process execution as versions of a system-of-interest (SoI) at various life stages. The fundamental changes that take place during the life cycle of any man-made system include definition, production, and utilization. When building upon these, it is useful to consider the structure of a generic process and product life cycle stage model as portrayed in Figure 1 below. 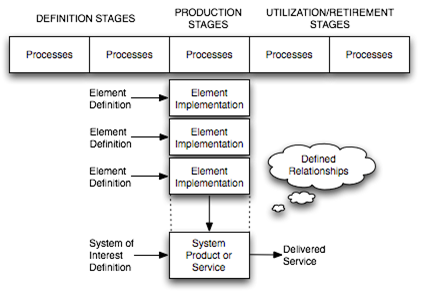 Figure 1. Generic (T) Stage Structure of System Life Cycle (Lawson 2010). Reprinted with permission of Harold "Bud" Lawson. All other rights are reserved by the copyright owner.

The (T) model indicates that a definition stage precedes a production stage where the implementation (acquisition, provisioning, or development) of two or more system elementssystem elements has been accomplished. The system elements are integrated according to defined relationships into the SoI. Thus, both the process and product aspects are portrayed. The implementation and integration processes are followed in providing the primary stage results—namely, in assembled system product or service instances. However, as noted in life cycle models, the definition of the SoI when provided in a development stage can also be the result of first versions of the system. For example, a prototypeprototype, which may be viewed as a form of production or pre-production stage. Following the production stage is a utilization stage. Further relevant stages can include support and retirement. Note that this model also displays the important distinction between definition versus implementation and integration.

According to ISO/IEC/IEEE 15288 (2015), this structure is generic for any type of man-made SoI to undergo life cycle management. The production stage thus becomes the focal point of the (T) model at which system elements are implemented and integrated into system product or service instances based upon the definitions. For defined physical systems, this is the point at which product instances are manufactured and assembled (singularly or mass-produced). For non-physical systems, the implementation and integration processes are used in service preparation (establishment) prior to being instantiated to provide a service. For software systems, this is the point at which builds that combine software elements into versions, releases, or some other form of managed software product are produced.

This is illustrated in the Dual Vee model (Figures 2a and 2b). The Dual Vee model is a three-dimensional system development model that integrates product and process in the creation of the system and component architectures. It emphasizes

When decomposition terminates according to the practical need and risk-benefit analysis, system elements are then implemented (acquired, provisioned, or developed) according to the type of element involved. 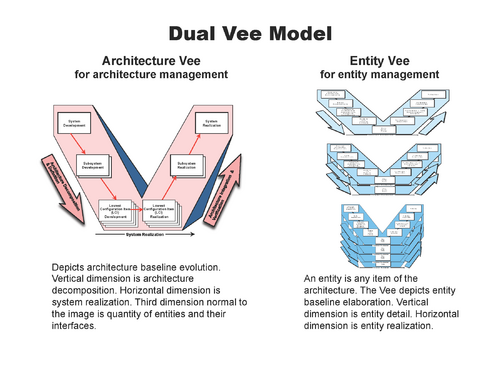 Figure 2a. The Dual Vee Model (2a) (Forsberg, Mooz, Cotterman 2005). Reprinted with permission of John Wiley & Sons Inc. All other rights are reserved by the copyright owner. 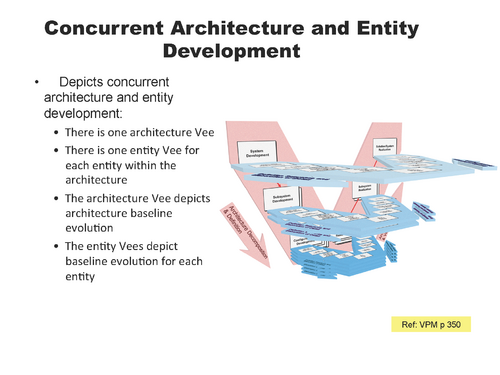 Figure 2b. The Dual Vee Model (2b) (Forsberg, Mooz, Cotterman 2005). Reprinted with permission of John Wiley & Sons Inc. All other rights are reserved by the copyright owner.

A practical aspect that can impact the process and product aspect is the decision to use off-the-shelf elements in commercial-off-the-shelf (COTS) form. In this case, further decomposition of the element is not necessary. The use of COTS elements (and their internally created neighbor or non-development item (NDI)) has become widespread, and they have proven their value. However, developers must make sure that the COTS product is appropriate for their environment.

A known flaw which occurs infrequently in normal use of the product in its intended environment may be benign and easily dealt with. In a new situation, it could have dramatic adverse consequences, such as those that occurred on the USS Yorktown Cruiser in 1998 (Wired News Contributors 1998). The customer mandated that Windows NT be used as the primary operating system for the ship. A divide by zero fault caused the operating system to fail, and the ship was dead in the water. It had to be towed back to port on three occasions.

Spiral models concurrently engineer not only process and product models, but also property and success models. Figure 3 shows how these models provide checks and balances, both at milestonemilestone reviews and as individual model choices are made. Methods and tools supporting this concurrent engineering are provided in “When Models Collide: Lessons from Software System Analysis” (Boehm and Port 1999), “Avoiding the Software Model-Clash Spiderweb” (Boehm, Port, and Al-Said 2000), and “Detecting Model Clashes During Software Systems Development” (Al-Said 2003). 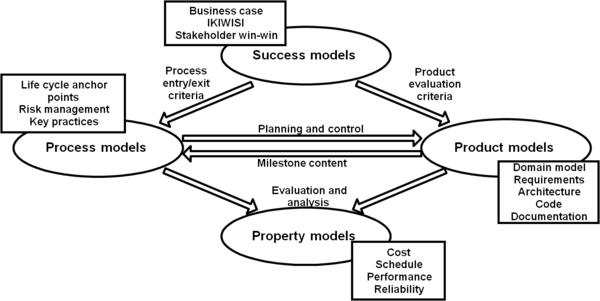 For software systems, entry into the production stages is the point at which builds that combine software elements (code modules) into versions, releases, or some other form of managed software product are created. Thus, the major difference between systems in general and software systems is the slight variant of the generic model as presented in Figure 4. 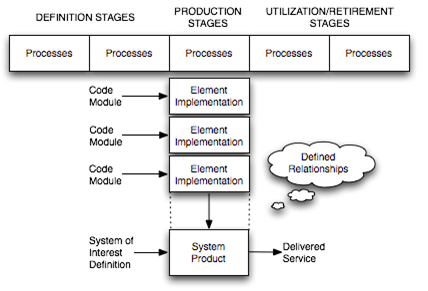 Figure 4. T-Model for Software System (Lawson 2010). Reprinted with permission of Harold "Bud" Lawson. All other rights are reserved by the copyright owner.

A sequential execution of life cycle stages is the most straightforward. As presented in System Life Cycle Process Models: Vee and System Life Cycle Process Models: Iterative, variants of the Vee model and the spiral model provide non-sequential models when practical considerations require a non-linear execution of life cycle stages. Building upon these two models, it is important to note that various types of complex systems require that the stages of the life cycle model be revisited as insight (knowledge) is gained, as well as when stakeholder requirements change. The iterations may involve necessary changes in the processes and in the product or service system. Thus, within the context of the (T) stage model, various orderings of stage execution - reflecting forms of non-sequential stage ordering - can be conveniently described, as portrayed in Figure 5. 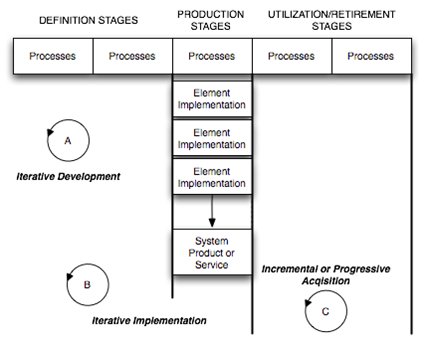 Figure 5. Iteration Through Life Cycle Stages (Lawson 2010). Reprinted with permission of Harold "Bud" Lawson. All other rights are reserved by the copyright owner.

Each pattern of stage execution involves iteration of the previous stages, perhaps with altered requirements for the processes or the system. The heavy lines in Figure 5 denote the demarcation of the revisited end points. Three are iterative forms, for which several variants can be extracted:

In all of the approaches it is wise to use modeling and simulation techniques and related tools to assist in understanding the effect of changes made in the complex systems being life cycle managed. These techniques are typically deployed in the earlier stages; however, they can be used in gaining insight into the potential problems and opportunities associated with the latter stages of utilization and maintenance (for example, in understanding the required logistics and help-desk aspects).

Allocating and Meeting Requirements - Integration of Process and Product Models

Regardless of the order in which life cycle stages are executed, stakeholder requirements for the system, including changed requirements in each iteration, must be allocated into appropriate activities of the processes used in projects for various stages as well as to the properties of the elements of the product system or service system and their defined relationships. This distribution was illustrated in the fourth variant of Lawson’s T-model as presented in System Life Cycle Process Models: Iterative and System Life Cycle Process Models: Vee.

Figure 6a. New Product Planning Process – Getting Started (Forsberg, Mooz, and Cotterman 2005). Reprinted with permission of John Wiley & Sons Inc. All other rights are reserved by the copyright owner.

Figure 6b. New Product Planning Process Solving the Problem (Forsberg, Mooz, and Cotterman 2005). Reprinted with permission of John Wiley & Sons Inc. All other rights are reserved by the copyright owner. 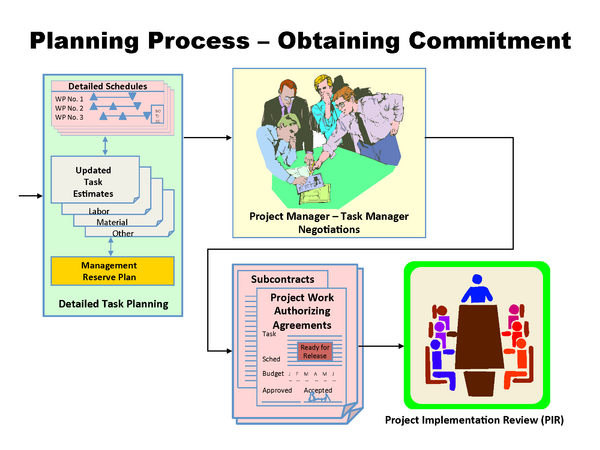 Figure 6c. New Product Planning Process – Getting Commitment (Forsberg, Mooz, and Cotterman 2005). Reprinted with permission of John Wiley & Sons Inc. All other rights are reserved by the copyright owner.