Electromagnetic Interference (EMI) is the disruption of operation of an electronic device when it is in the vicinity of an electromagnetic field in the radio frequency (RF) spectrum. Many electronic devices fail to work properly in the presence of strong RF fields. The disturbance may interrupt, obstruct, or otherwise degrade or limit the effective performance of the circuit. The source may be any object, artificial or natural, that carries rapidly changing electrical currents.

EMI is categorized into two types in order to help in analyzing conducted and radiated interference effects: narrowband and broadband. These type of emissions are defined as follows.

A narrowband signal occupies a very small portion of the radio spectrum… Such signals are usually continuous sine waves (CW) and may be continuous or intermittent in occurrence… Spurious emissions, such as harmonic outputs of narrowband communication transmitters, power-line hum, local oscillators, signal generators, test equipment, and many other man made sources are narrowband emitters. (Bagad 2009, p. G-1)

A broadband signal may spread its energy across hundreds of megahertz or more… This type of signal is composed of narrow pulses having relatively short rise and fall times. Broadband signals are further divided into random and impulse sources. These may be transient, continuous or intermittent in occurrence. Examples include unintentional emissions from communication and radar transmitters, electric switch contacts, computers, thermostats, ignition systems, voltage regulators, pulse generators, and intermittent ground connections. (Bagad 2009, p. G-1)

These compromising emanations consist of electrical, mechanical, or acoustical energy intentionally or unintentionally emitted by sources within equipment or systems which process national security information. Electronic communications equipment needs to be secured from potential eavesdroppers while allowing security agencies to intercept and interpret similar signals from other sources. The ranges at which these signals can be intercepted depends upon the functional design of the information processing equipment, its installation, and prevailing environmental conditions.

Assigning frequencies is very complicated as shown in the Radio Spectrum allocation chart in figure 2. Frequencies sometimes are used in the commercial world that are actually assigned to US government Agencies such as the Department of Defense. One such incident occurred when an automatic garage door vendor had installed their doors on a number of homes near a government installation using the same frequency as the installation. Random opening and closing of the doors created a problem for the vendor that could have been avoided.

Four ITU organizations affect spectrum management: the World Radio-communication Conference (WRC), the Radio Regulations Board (RRB), the Radio-communications Bureau (RB), and the Radio-communication Study Groups (RSG) (Stine and Portigal March 2004). The WRC meets every four years to review and modify current frequency allocations. The RB registers frequency assignments and maintains the master international register. The RRB approves the Rules of Procedures used by the BR to register frequency assignments and adjudicates interference conflicts among member nations. The SG analyzes spectrum usage in terrestrial and space applications and makes allocation recommendations to the WRC. These regulations have treaty status. Most member nations generally develop national frequency allocation polices that are consistent with the Radio Regulations (RR). Nations are still sovereign and may operate systems, provided that nation does not cause interference and is willing to accept interference.

Most countries have a single government agency to perform the spectrum management function. In contrast, the Communications Act of 1934 established a dual management scheme for the United States. In this scheme, the Federal Communications Commission (FCC) is responsible for all non-government usage and the President is responsible for federal government usage. The FCC is directly responsible to Congress. By executive order, the President delegates the federal government spectrum management to the National Telecommunications and Information Administration (NTIA), which is placed under the Secretary of Commerce. The dual approach was selected so that decisions concerning commercial interests would be made only after considering their impact on government systems, and so that government usage supported commercial interests.

The FCC regulates all non-federal government telecommunications using Title 47 of the Code of Federal Regulations. (For example, see (FCC 2009, 11299-11318).) The FCC is directed by five Commissioners appointed by the President and confirmed by the Senate for five-year terms. The Commission staff is organized by function. The responsibilities of the six operating Bureaus include processing applications for licenses, analyzing complaints, conducting investigations, implementing regulatory programs, and conducting hearings (http://www.fcc.gov).

The NTIA performs spectrum management function through the Office of Spectrum Management (OSM), governed by the Manual of Regulations and Procedures for Federal Radio Frequency Management. The IRAC develops and executes policies, procedures, and technical criteria pertinent to the allocation, management, and usage of spectrum. The Spectrum Planning and Policy Advisory Committee (SPAC) reviews the reviews IRAC plans with regard to a balanced consideration of manufacturing, commerce, research, and academic interests. Within the Department of Defense, the spectrum planning and routine operation activities are cooperatively managed. Spectrum certification is a mandated process that ensures (1) the frequency band usage and type of service in that band are in conformance with the appropriate national and international tables of frequency allocations, (2) the equipment conforms to all applicable standards, specifications, and regulations, and (3) approval is provided to expend funds to develop equipment dependent upon wireless communications.

In peacetime, international spectrum governance requires military forces to obtain host nation permission to operate spectrum-dependent systems and equipment within a sovereign nation. As an example international governance is honored and enforced within the United States by the U.S. departments of state, defense and the user service. In wartime, international spectrum governance is not honored between warring countries; however, the sovereign spectrum rights of bordering countries must be respected by military forces executing their assigned missions.

Accordingly, as another example, HNA is solicited by U.S. Naval forces to use spectrum-dependent systems and equipment in bordering countries' airspace and/or on bordering countries' soil. HNA must be obtained before the operation of spectrum-dependent systems and equipment within a sovereign nation. The combatant commander is responsible for coordinating requests with sovereign nations within his or her area of responsibility. Because the combatant commander has no authority over a sovereign nation. The HNC/HNA process can be lengthy and needs to be started early in the development of a system. Figure 2 is a spectrum example. 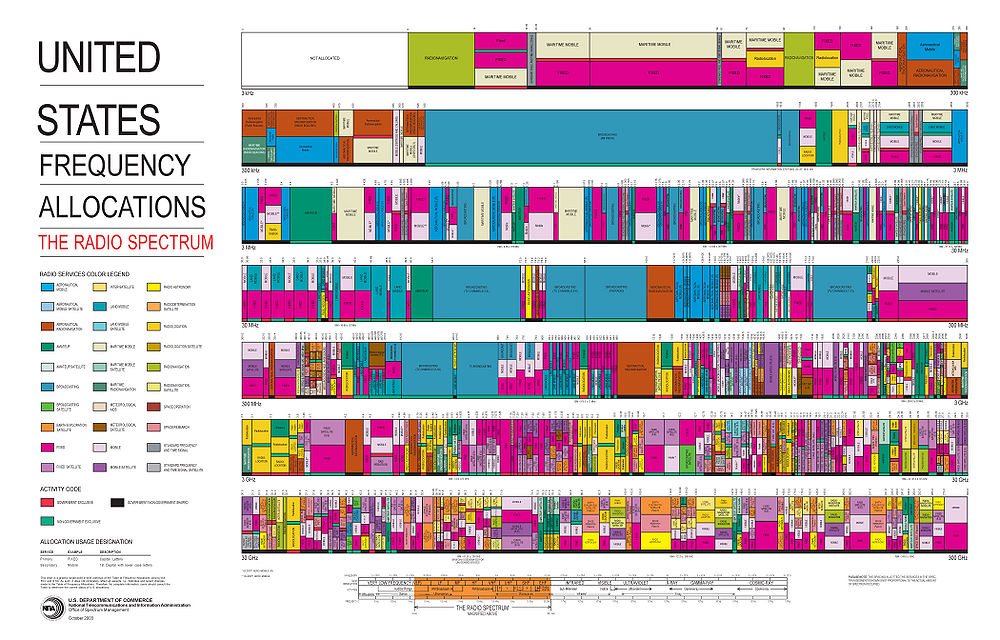 Radiation Hardening techniques are used for designing electronic devices and systems in order to resist damage or malfunction caused by ionizing radiation (van Lint and Holmes Siedle 2000). Electronics in systems can be exposed to ionizing radiation in the Van Allen radiation belts around the Earth’s atmosphere, cosmic radiation in outer space, gamma or neutron radiation near nuclear reactors, and electromagnetic pulses (EMP) during nuclear events.

Most radiation hardened components are based on the functionality of their commercial equivalents. Design features and manufacturing variations are incorporated to reduce the components' susceptibility to interference from radiation. Physical design techniques include insulating substrates, package shielding, chip shielding with depleted boron, and magneto-resistive RAM. Logical design techniques include error-correcting memory, error detection in processing paths, and redundant elements at both circuit and subsystem levels (Dawes 1991). Nuclear hardness is expressed as susceptibility or vulnerability for given environmental conditions. These environmental conditions include peak radiation levels, overpressure, dose rates, and total dosage.

EMI/EMC is difficult to achieve for systems to operate world wide because of the different frequencies products are designed to operate in each of the telecommunication areas. Billions of US Dollars have been spent in retrofitting US DoD equipment to operate successfully in other countries.

No comments were logged for this article in the SEBoK 0.5 wiki. Because of this, it is especially important for reviewers to provide feedback on this article. Please see the discussion prompts below.

Please provide your comments and feedback on the SEBoK below. You will need to log in to DISQUS using an existing account (e.g. Yahoo, Google, Facebook, Twitter, etc.) or create a DISQUS account. Simply type your comment in the text field below and DISQUS will guide you through the login or registration steps. Feedback will be archived and used for future updates to the SEBoK. If you provided a comment that is no longer listed, that comment has been adjudicated. You can view adjudication for comments submitted prior to SEBoK v. 1.0 at SEBoK Review and Adjudication. Later comments are addressed and changes are summarized in the Letter from the Editor and Acknowledgements and Release History.

If you would like to provide edits on this article, recommend new content, or make comments on the SEBoK as a whole, please see the SEBoK Sandbox.